This is J. Gordon Whitehead

This is the only known photo of Jocelyn Gordon Whitehead, the McGill University student who punched Houdini in his dressing room at the Princess Theater in Montreal on October 22, 1926. Whitehead's blows either started, contributed, or covered-up (lots of debate about this) the appendicitis that would take Houdini's life nine days later on Halloween. 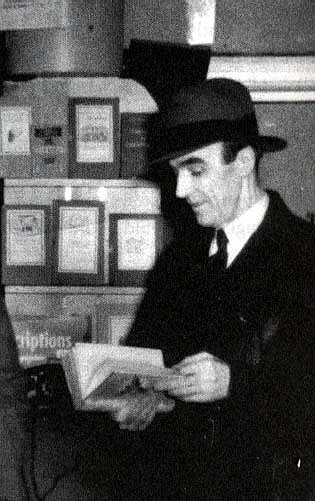 This photo comes from The Man Who Killed Houdini by Don Bell, a MUST read for anyone interested in the events of 10/22/26. It shows Whitehead in Rodick's Bookstore in Montreal around 1950. Bell says Whitehead was 31 when he delivered the blows, so this would put him in his mid 50s here.

Sort of ironic that Whitehead is holding a book here. Returning a borrowed book was how he gained entry to Houdini's dressing room that fateful day. He was also charged with shoplifting books twice in 1928.

According to Bell, the troubled Whitehead died a recluse and hoarder in 1954. He is buried in an unmarked plot in Hawthorn-Dale Cemetery in Montreal, Canada.

Thanks to Dorothy Dietrich and Dick Brookz of the Houdini Museum in Scranton for this image scan.

UPDATE: Is this J. Gordon Whitehead at McGill in 1926?