Bess, Rasputin, and the Czar's brooch

The following is from the The Magic Castle Friday Lunch newsletter for February 11, 2011, written by Milt Larsen himself. This is pure gold. With all the reading and research I do, this is the kind of thing you only hear at The Castle. And, yes, there is a photo of the young Milt with Bess in the Seance Room (I always show it to my guests), and I have seen the broach on Arlene. Magic indeed. Enjoy.

On this date in magical history 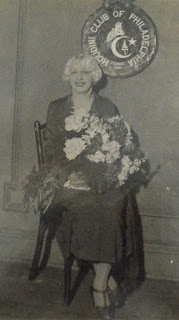 Sorry to report the passing of Harry Houdini’s wife, Beatrice Houdini. She died on the train to New York at the age of sixty-six. The year was 1943. I had the pleasure of knowing Mrs. Houdini since she was a great friend of my parents. Dad was an attorney and handled all her legal affairs pro bono. She helped them start Genii Magazine in 1936 and joined my mother in founding Magigals, the first club for lady magicians. There is a nice photo of a little kid doing a coin trick for Mrs. Houdini mounted on the wall in the Houdini Seance Room. I think I was about eight at the time. I remember her as a very nice lady.

Mrs. Houdini gave my mother a broach made from a pin the Czar of Russia gave to Houdini. Houdini historian Pat Culliton lunches with us almost every Friday so he can tell you the story of Houdini’s fascinating relationship with the Czar. Houdini was offered the job of spiritual advisor to the family which he turned down. They job went to a fake spiritualist named Rasputin. Later the Czar wanted to hire Houdini to expose Rasputin. Pat probably has the facts but according to my mother the Czar gave Houdini the emerald and ruby encrusted pin at a dinner party honoring the Houdinis. The Czar felt Houdini insulted him when Harry refused to toast the occasion. He refused to drink wine. Hey, Patrick. That’s what mom said and if you can’t trust your mother who can you trust.

What happened to that broach? Mother gave it to my wife Arlene and she wears it on very special occasions.