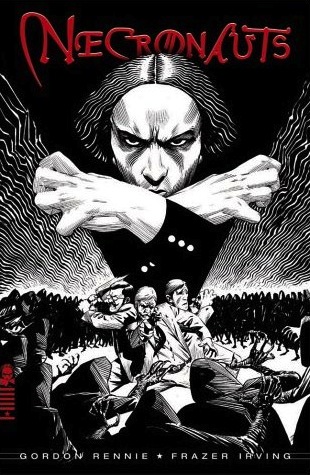 Here's a Houdini mash up graphic novel that I missed when it was released by Rebellion in 2003. Necronauts

teams Houdini, Sir Arthur Conan Doyle, Charles Fort, and H.P. Lovecraft in a supernatural thriller (not unlike the recently released Edge of the Unknown). The book was written by Gordon Rennie with illustrations by Frazer Irving.

Set on Halloween Eve in 1926, the story finds Houdini, Conan Doyle, Lovecraft, and Charles Fort pinned inside Houdini's New York home by demons inadvertently summoned by Houdini's experiments exploring the boundaries between life and death. As Fort and Doyle battle the physical creatures in the halls of 278, Lovecraft and Houdini venture into the netherworld to try and defeat the awakened "Sleepers."

Considering the time frame, it's not really a spoiler to reveal that Houdini dies in this story. This makes it unique among printed Houdini fiction in that it suggests an alternate version of his demise (which, of course, must be covered up). It's all good stuff. Hardeen even puts in an appearance, although for some reason he's bald and sports a handlebar mustache.

Unfortunately, this is now not an easy book to find at a reasonable price. It is listed on Amazon