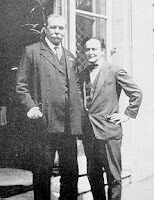 Well, this is interesting. Hot on the news that DreamWorks had acquired the Houdini/Conan Doyle mash-up, Voices from the Dead, comes word that the Syfy network has made a deal to produce a TV series with the exact same premise.

Deadline Hollywood reports that Syfy will produce Among the Spirits, a dramatic series about Houdini and Sir Arthur Conan Doyle solving mysteries in the 1920s. "I guess there is something in the air about that whole time period and that very interesting relationship between Houdini and Doyle," said Syfy's president of original programming Mark Stern.

Among the Spirits is based on self-published graphic novel of the same name by writers Steve Valentine and Paul Chart. Deadline reports that the series will be in the vein of steampunk TV classic The Wild Wild West and Guy Ritchie's 2009 movie Sherlock Homes. It will center on Houdini and Doyle who, with the help of a female cop, try to solve bizarre murders and strange occurrences that look like hauntings and other supernatural events using steampunk technology.

Says Stern, "We have Houdini, who was the ultimate illusionist and was all about creating illusions, and Dolyle, who was all about getting to the truth underneath - the dreamer and the pragmatist - set against that 1920s world of America where technology is just starting to grow."

E1 Entertainment will produce Among the Spirits with Chart and Valentine writing as well as producing with Daniel J. Frey.
Written by John Cox at 7:49 AM