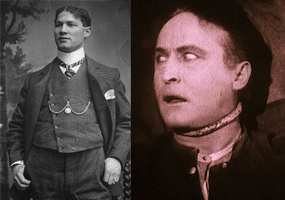 I've just subscribed to The Conjuring Arts Research Center's amazing Ask Alexander search engine, and I've already made the first of what I expect will be many more mind-blowing discoveries in their incredible archive of old magic magazines.

A small item in the "Editriva" column of a 1934 issue of The Jinx reveals the news that Houdini's brother, Theo. Hardeen, "is negotiating with Paramount for a redoing of The Master Mystery." (!) Presumably, the idea here was to remake the silent Houdini serial as a sound film with Hardeen in the starring role of Quentin Locke.

There is no mention of this project again, but the mind boggles at the possibility. I actually think it was a pretty shrewd idea for Dash to pitch a remake of his brother's movie. But why The Mastery Mystery? Wouldn't one of Paramount's own Houdini films -- The Grim Game or Terror Island -- be the more obvious candidate? Unless the idea here was specifically to make a new serial.

It's too bad Hardeen never made a movie... Oh, wait, he DID! Maybe even several.

Ask Alexander has opened the door and I'm on the case of Theo. Hardeen's lost movie career. As they say in the serials...

UPDATE: Our friend Joe Notaro has gotten to the bottom of this on his terrific blog, Harry Houdini Circumstantial Evidence. It appears this was not to be a remake starring Hardeen, but a reissue of the original with new narration and musical score. Check out Joe's full post below:


“The Master Mystery” Reissued By Hardeen?
Written by John Cox at 12:57 PM