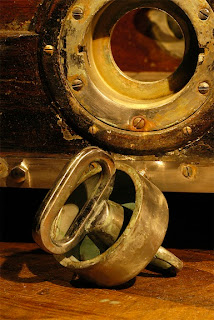 UPDATE: I just spoke to John Gaughan and this is NOT the original restored cell. This is a working replica he created from the original. Sorry about that. But this will still be cool to see as it is said to be identical to the real cell.

Breaking news! Joan Lawton announced last night at The Magic Castle that the original-restored Houdini Water Torture Cell will be displayed at the Skirball Cultural Center in Los Angeles when the Houdini Art and Magic exhibition arrives there on April 28, 2011.

The cell is being supplied by John Gaughan who performed the restoration on the historic prop after it was destroyed by fire in 1995. The original cell will ONLY be displayed at this L.A. stop.

The Skirball Center will also feature a retrospective of Jewish magicians called Masters of Illusion: Jewish Magicians of the Golden Age, featuring items from the collections of Mike Caveney and others. Dozens of photos, posters, and an original copy of The Discoverie of Witchcraft will be part of that display.

Houdini Art and Magic is currently on show at The Jewish Museum in New York. It will open at the Skirball Center on April 28 and run through September 4, 2011, before moving on to San Francisco and Wisconsin.
Written by John Cox at 8:01 AM