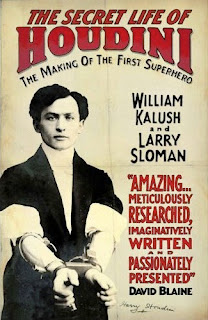 , the first film in what they hope will be an "action franchise" featuring Houdini’s fictional exploits as a spy for the British and U.S. governments.

Summit picked up the rights to the biography by William Kalush and Larry Sloman amid great fanfare in March 2009. It was then quickly announced that Jeff Nathanson had signed on to write and direct. That was the last word on the project. THR says Nathanson is no longer involved.

Perhaps the news last week that DreamWorks and SyFy were developing their own Houdini projects helped give the long stalled project a kick in the straitjacket.

Oppenheim previously worked on the script for the teen adventure adaptation Maze Runners. Summit's Erik Feig, Geoff Shaevitz, and Ashley Schlaifer, who originally brought the book to the Summit, will oversee the project for the studio.
Written by John Cox at 6:00 PM