Pierre Collings and Houdini The Great 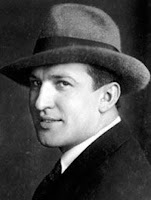 The stellar blog HOLLYWOODLAND has a profile of screenwriter Pierre Collings, best known for the Oscar winning The Story of Louis Pasture. But inside the article is this intriguing nugget:

"Soon after, Collings health improved enough for him to accept an assignment to write the screenplay for a projected Warner Bros. film, Houdini the Great which was scheduled to star George Raft. For whatever reason, the project never materialized."

George Raft as Houdini is something I've never heard. Also, I thought Houdini the Great was in development at Paramount, not Warner Bros. Looks like this is something to investigate.

Click to read The tragic story of Pierre Collings at HOLLYWOODLAND.
Written by John Cox at 7:38 AM