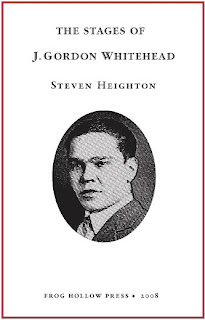 Here is one of the more unusual pieces of Houdini tie-in fiction to ever come along.

The Stages of J. Gordon Whitehead by Steven Heighton invents a history for the infamous McGill University student who delivered the "fatal" blows to Houdini in Montreal.

"Heighton's Whitehead might be thought of as a refugee from irony; ever since his fateful blow to Houdini's stomach, irony stalks him, from the streets of Montreal to the mountains of the American south. The story is not judgemental and even allows for the doomed Whitehead, in his own way, to be redeemed."

You can purchase The Stages of J. Gordon Whitehead at Frog Hollow Press for $25 (incl. s/h). The paperback printing is limited to 75 copies. A special Deluxe Edition limited to 20 copies is sold out.