A 1902 stone lithograph depicting Houdini's victory in the German courts will be auctioned on March 26, 2011, as part of Potter & Potter's Rare Posters sale. The color one-sheet by J. Zier, which the auction house calls "Houdini Triumphant", measures 43 x 31 1/2 and is one of only five known copies. It is the star attraction of an auction that includes many beautiful magic posters from the early 20th century. The estimate is $15,000/20,000. 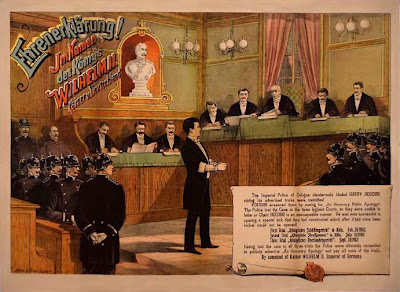 There is actually a second, less common example of this famous poster that features a different and, IMO, superior image of Houdini shackled before the judge. You can see it on page 8 of the Dover paperback edition of Gibson's Houdini on Magic

(although it's possible this alternate version is just a piece of a larger poster montage.)

The auction also features a Houdini Challenge broadside from 1915 ("A Peculiar Challenge") estimated at $1,500/2000. There is also a beautiful 1920 poster for Nicola, the largest poster in the auction, featuring terrific Houdini-like escape imagery. Estimate $2,500/3,500. 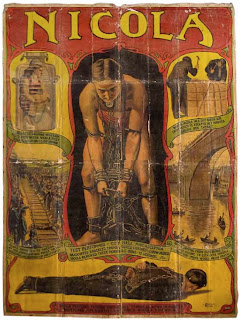 Visit the official Potter & Potter website to order or download the Rare Posters catalog (which features "Houdini Triumphant" on the cover), and for details on how to bid. Also check out this report on the auction from ABC News.