Get ready for a meeting of The Handcuff King and The Vamp. Looks like Houdini makes a guest appearance in the newly released The Director's Cut: A Theda Bara Mystery by Christopher DiGrazia. 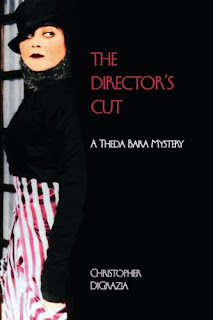 When makeup artist Toby Swanson joined the Fox Film Corporation in 1914, he hoped to sneak a kiss from the studio's newest star, the seductive vamp Theda Bara. But when a scene goes horribly wrong, Bara's film is cancelled and her dreams of stardom crushed. Unless she can prove what looked like an accident was really murder.

So together, Theda and Toby dive into showbiz New York, from dancing with a young Rudolph Valentino to sharing the vaudeville stage with Sophie Tucker and learning lockpicking secrets from Harry Houdini, all leading to a long-forgotten church crypt holding a desperate secret.

It's New York at the dawn of the twentieth century, a time of big bridges, big skyscrapers and big money. And it's a time when movies - the biggest new business of them all - joins hands with the oldest. The Director's Cut is the first of the Theda Bara Mysteries.


Purchase on Amazon.com.
Written by John Cox at 9:38 PM