The forgotten films of Theo Hardeen 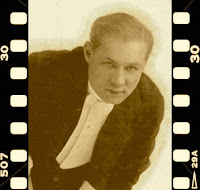 Houdini made movies. We know that. Less well-known is the fact that Bess also made a movie (Religious Racketeer). But what about the third member of the performing family, Houdini's younger brother, Theo. Hardeen? It would appear he shied away from the silver screen. But it turns out that isn't the case at all. In fact, it's possible Hardeen may have made more movies than Houdini himself. But these films have been almost totally forgotten -- until now.

Evidence of Hardeen's movie career can be found scattered among the pages of magic magazines from the 1930s. As I recently revealed here at Wild About Harry, Hardeen pitched a remake of The Master Mystery to Paramount in 1934 with, presumably, himself in the role of Quentin Locke. But when he did this he was no cinema novice. According to the same article, Hardeen had "just finished the second series of six shorts at the Astoria studios." This is an astounding revelation. If his first "series" were the same number of films, this means Hardeen had made twelve short films by 1934!


Astoria Studios, located in Queens, New York, was built by Famous Players-Lasky in 1920 and operated as Paramount's East Coast Studio. Many features and short subjects were filmed there between 1920 and 1933, with two most famous being the Marx Bros. first features, The Cocoanuts

. The studio was also home to the Paramount Newsreels and prolific short film divisions. When Paramount moved all production to California, Astoria was turned over to independent producers whose films were released through Paramount. It was during the start of this independent era that Hardeen made his shorts.

It's likely Hardeen made these shorts for Paramount's short film division. He was performing on the Paramount theater circuit at this time, and that fact that he's pitching a remake of The Master Mystery to Paramount shows he's acquainted with the motion picture division. But the year opens up the possibility that the shorts were made independently and just used Astoria as a facility, which makes tracking down information on them, not to mention prints, much harder. At the moment, I can find nothing more about these Astoria shorts, except that they exist (or existed). But that's more than we knew before.

However, there is one Hardeen movie that we do know something about. Medium Well Done was a one reel short Hardeen made for Warner Bros. in 1936. In it, Hardeen played a "hardboiled detective" on the case of a bogus medium. It was clearly made as a starring vehicle for the magician. Surviving production records spell out the title as, "Theodore Hardeen in Medium Well Done."

Medium Well Done was a Vitaphone Short Subject, production #1958, directed by Lloyd French, who directed many of the early Laurel and Hardy shorts. It was shot at the Flatbush Vitaphone Studios in January 1936, but wasn't released until March 1937. The film featured the Leo Forbstein songs "Racing Luck" and "Alibi Ike" as background instrumental music. David Mendoza was the Musical Director. An exhibitor story synopsis reads:

MEDIUM WELL DONE. Vitaphone–Novelty. 10m. Hardeen, the magician, exposes trickery in the seance racket. Posing as a friend of a couple being duped, he accepts a medium's challenge to duplicate her tricks. It is all very interesting. GOOD.


Medium Well Done was said to have been one of four Vitaphone shorts Hardeen made for Warner Bros. However, I could find no record of the other films, leading me to suspect they were never made. Maybe that's because Medium Well Done didn't turn out...all that well done, at least according to Robert Nelson in The Linking Ring who wrote:

"I recently witnessed the Vitaphone short, Medium Well Done, featuring that stellar star, Theodore Hardeen. I don't propose to be much of movie critic, but the picture certainly was 'medium well done.' What ever might have been its purpose, I am sure it failed. As a comedy, it did not even rate (should be classed as such). Oh hum, give me Mickey Mouse next time!"


Currently, there don't appear to be any surviving prints of Medium Well Done. But this could be because no one has even known to look for it. The word is out and the search is on for Hardeen's lost Vitaphone short. Stay tuned.

One film Hardeen surprisingly didn't appear in was the movie version of Olsen and Johnson's Hellzapoppin' (1941), the popular Broadway show that Hardeen had successfully played in for four years. But the movie was only a very loose adaptation of the stage show. Still, this feature has survived, so it would have been our best way today to see Hardeen on film.

Perhaps the info in this post will opens a few vault doors, and maybe one day soon we will see one, if not all, of the forgotten films of Theo. Hardeen.

My thanks to the staff of the USC Warner Bros. Archives and Ron Hutchinson of The Vitaphone Project for their assistance in uncovering information on Medium Well Done. Also thanks to Bill Mullins.

UPDATE: According to Ron Hutchinson of The Vitaphone Project, a 35mm print of Medium Well Done exists in the Library of Congress. This is great news and it gives me hope that one day we might see it released via the Warner Archive Collection. Stay tuned!
Written by John Cox at 10:58 AM