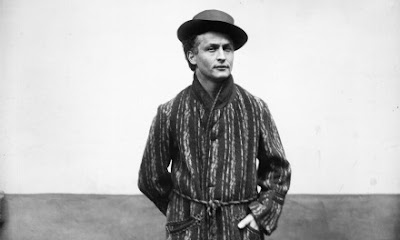 Check out this curious photo of Houdini that Kevin Connolly found on a Hungarian website accompanying an article about the Houdini Art and Magic exhibition. Is this photo on the level? At first glance, it feels like there is something fake about this shot, and it's not just that it's such an untypical picture of Houdini.

However, I followed the AFP photo credit and found the image at the AFP Image Forums. According to the website, this was taken in Paris in April 1909, and is copyrighted Maurice-Louis Branger/Roger-Viollet.

Could this have been taken while Houdini was filming Les merveilleux exploits de Houdini à Paris for Film Lux? The year is right, as is the "movie star" attitude.

Just goes to show, when it comes to Houdini, there's still plenty out there to discover. Nice find, Kevin!
Written by John Cox at 11:59 AM