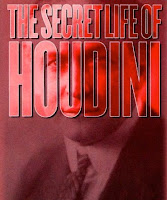 Summit Entertainment's The Secret Life of Houdini movie (that's the Houdini as action hero one) is back in the news...somewhat.

Noah Oppenheim, who was announced as the film's screenwriter in February, has just been tapped to write MGM's remake of WarGames. Various blogs and movie news sites have picked up the story and each mentions Oppenheim's involvement with the Houdini project, but TG Daily adds one bit of additional information. The site states:

He’s currently also working on a film called The Maze Runner, and another called The Secret Life of Houdini, but we won’t be seeing those until 2013 and 2014, respectively.


So no Secret Life of Houdini movie until 2014? Unfortunately, the website doesn't give a source for this exclusive bit of information.

UPDATE: Ah, I expect their source was IMDb, which is not a reliable source when it comes to movies in development. Heck, IMDb still says that I have a movie coming out in 2011, but I can assure that sucker was killed in the development crib in 2009.
Written by John Cox at 10:13 AM