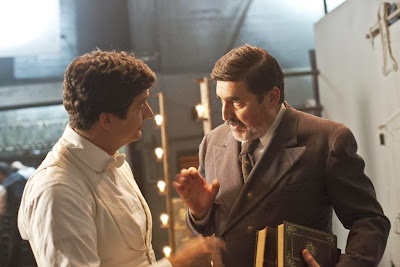 Last night Drunk History aired a segment about Houdini in an episode titled, "Detroit." For those who aren't familiar with the Comedy Central series, Drunk History features soused storytellers talking about real history while well-known actors perform their inebriated version of events. It's pretty funny stuff.

In last night's episode, Ken Marino and Alfred Molina played Houdini and Sir Arthur Conan Doyle respectively. The storyteller was Lucius Dillon, who was very, very drunk. The Houdini segment was the last, longest, and drunkest of the show. It was broken up by a commercial break.

For all the frivolity of their approach, Drunk History actually did a good job with their Houdini history -- far more responsible and accurate than some of the recent offerings from the cable networks (yes, Brad Meltzer's Decoded, I'm still talking about you). While there were no egregious inaccuracies, I can offer up a few picky points of clarification. So let's do this thing.

Houdini and Bess (played by Maria Blasucci) did indeed work briefly as spirit mediums early in their careers. However, they did a stage act, not private consultation as depicted in the reenactment. Also, I don't know where that bit about Bess posing as a "Bible salesman" to glean personal information came from. That must have been the booze talking.

Atlantic City 1922 is the correct date and location of the Houdini-Doyle seance. However, the show depicted Houdini as performing there with Doyle visiting him backstage. In reality the Houdinis were vacationing with the Doyles when the big seance went down.

The seance with Lady Doyle (played by Sarah Burns) was depicted as being spoken communication, whereas in reality it was all done via "Automatic Writing." In fairness, Dillon did say the communication would be done with "handwriting", but it was much funnier having the Burns/Dillon wildly articulate the ghostly words from Houdini's mother. Houdini did indeed ask if his mother's ghost could read his mind, and Lady Doyle did make the sign of the cross on the top of her notepad. The show depicted Houdini as blowing his top at the seance, but in reality he kept his feelings to himself at that sitting.

Houdini did wear disguises to seances (here's one) and aggressively exposed mediums on the spot. Whether or not he flipped them a double bird on his way out the door...only the spirits know.

The dressing room assault by J. Gordon Whitehead (here played by show creator Derek Waters) was not quite as abrupt as depicted in the reenactment. Houdini was also reclining on a couch at the time of the blows. The reenactment suggested a stricken Houdini went right from his dressing room to his final performance, but in reality the assault happened while Houdini was in Montreal. He traveled to Detroit to give his last performance two days later.

Houdini did indeed perform his final show at the Garrick Theater with a 104 degree temperature and a burst appendix (which probably ruptured on the overnight train ride to Detroit), although his appendicitis would not be discovered until he was operated on the next day. Houdini final performance was not as sloppy as shown in the reenactment, although the interior agony of it might have been very accurate for what Houdini himself was experiencing. There was indeed a man in the audience who had seen Houdini before (not sure about "8 times") who sensed that something was wrong. Others who had not seen Houdini thought the show was pretty good.

Houdini did die in Grace Hospital in Detroit on Halloween, although the Doyles were not by his bedside. Houdini died with his brother Hardeen by his side. His doctors at the time were noncommittal about whether the blows caused the fatal infection. That would be fought about between his lawyer, Bernard Ernst, and the New York Life Insurance Co. for the next year. Ernst ultimately succeeded in pinning the cause of Houdini's final illness on the blows, which enabled Bess to collect double indemnity for accidental death. The debate as to whether Houdini was suffering from appendicitis before the blows continues to this day.

The "10 year compact" is something that might need to be tackled in a fresh post at some point, because exactly what Harry and Bess arranged is not so straight forward as that. But for now, yes, Houdini and his wife arranged a codeword that would identify him should he come back. Bess did give up on seances after 10 years and she did say, "Ten years is long enough to wait for any man." And, yes, Bess's hair was white by then.

So there's your sober recap of Drunk History. Kudos to the show for treating our man right and doing a good job with the history while still having a lot of fun.