Genii and The Magic Castle reunite in new deal 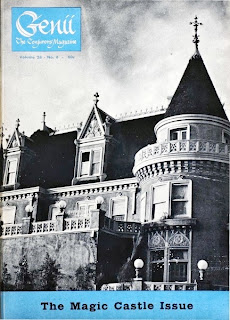 Some big news today from Richard Kaufman, editor and publisher of Genii Magazine, and the Academy of Magical Arts. Here's the full press release:

THE ACADEMY OF MAGICAL ARTS and GENII MAGAZINE

Beginning with the October issue, magician members will receive paid electronic monthly subscriptions to Genii as part of their membership.

“Thanks to the Board of the Academy, all magician members will now be paid subscribers to Genii,” according to Richard Kaufman, editor and publisher of Genii. “In addition, this is the beginning of an important and wonderful association between the magazine and the club. Genii will be featuring a new section of the magazine devoted to the Academy within its pages, and Genii subscribers will be able to make arrangements to visit their world famous clubhouse, The Magic Castle.” The Academy of Magical Arts is a private club, and visits are usually limited to members and their friends.

“I was proud to be able to put this deal together,” Neil Patrick Harris, president of the Board of Directors of the Academy of Magical Arts, explains. “The Magic Castle is a one-of-a-kind place. It’s not only a popular club and entertainment venue, but it’s an inspiration in our world of magic. This means that our membership will benefit from the latest thinking, the latest news in the world of magic. It’s a great gift to our magicians. I’ve always been a big fan of Genii.”

Genii and the Academy of Magical Arts have had a long, proud association over the years. The magazine is now the oldest continuously published independent magic magazine, and also the largest—both in terms of pages, as well as number of subscribers. It was originally founded in 1936 by editor William Larsen, Sr., of Los Angeles.

“He was the father of Bill, Jr. and Milt,” Kaufman explains. “Gerrie Larsen and her son Bill went on to edit Genii after his father’s death, and in 1962 Bill and Milt founded the Academy of Magical Arts, and in 1963, open the clubhouse The Magic Castle, the most prestigious magic club in the world.”

For many years, when it was edited by the Larsen family, Genii magazine regularly featured news and features from The Magic Castle. “After Bill’s death, the magazine was edited by his wife Irene, his son Dante, and then his daughter Erika,” according to Kaufman. “Genii and The Magic Castle were tied together tightly, in the affections of magicians around the world.” In 1998, Genii was sold to magic publisher Kaufman in order to continue its long run. “It was a selfless act on the part of Irene and her children,” Kaufman says. “They had a number of options, but they wisely chose to keep the magazine running.”

Erika Larsen, who edited the magazine before Kaufman, is now the Vice-President of the Board of Directors of The Academy of Magical Arts. “For the last year, we’ve been exploring ways of reuniting Genii with the Academy,” Erika Larsen says. “Richard had some very good ideas, and we were enthused about finding a way to offer subscriptions to Genii to our magician members, because it’s always been a valuable and important publication on the art of magic.”

The Board of Directors negotiated this arrangement: Genii subscribers will be allowed an annual reservation and visit to the club, and the Academy of Magical Arts will pay for magician members to receive electronic subscriptions. A feature of Genii subscriptions is access to the prestigious archives of all 75 years of the magazine; now Magic Castle magician members will be able to read the latest Genii news, and also access all of the important articles from 1936.

“In the spirit of Bill Larsen, Genii will remain an independent magazine,” Kaufman says, “but we’ll benefit from the energy of the Academy.” Genii will not serve as the newsletter of the club; the club newsletter will continue to be published for members by the Academy of Magical Arts.

“We’ve always been proud of Genii,” Erika Larsen says. “It’s a part of the Larsen family tradition, and we’re proud that it’s part of the Academy’s tradition again.”

“It really is a historic event in the world of magic, and I couldn’t be more pleased to partner with the Academy of Magical Arts,” according to Richard Kaufman. “The magicians who are members of the club will officially be part of our Genii family. That’s the way that it’s supposed to be. We know that they’ll enjoy the magazine, which I feel is at the top of its game, with great columnists, great features, and innovative magic. I am extremely proud of our new association.”

Details will be provided to members of the Academy of Magical Arts within the coming weeks so they can activate their digital subscriptions to Genii, The Conjurors' Magazine.


Of course, Genii and Houdini have also had a long association. The original editor, William Larsen, was Bess Houdini's lawyer, and Bess was a big supporter of the magazine during its formative years. Last year I ran a series looking back at all the Houdini-Genii issues which you can revisit HERE. 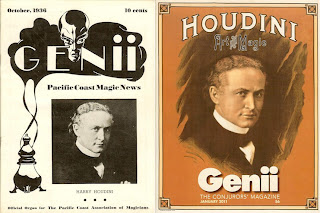 Congratulating Genii and The Magic Castle on this exciting new deal. It's great to see these two gems of the magic world reunited.
Written by John Cox at 6:08 AM