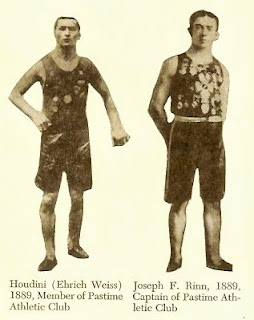 When did Harry Houdini become a magician? The answer is not always clear. While there are many tales of young Ehrich Weiss performing acrobatics and magic in five cent circuses in Wisconsin, most serious Houdini biographies attribute the start of his magic career with his reading The Memories of Robert-Houdin in 1891.

But according to the remarkable book, Sixty Years of Psychical Research, written by Houdini's boyhood friend Joseph F. Rinn in 1950, Houdini was giving semi-professional magic performances two years before he ever read the Robert-Houdin book. Rinn's recollections begin on page 65:

[In 1886] I joined the Pastime Athletic Club, which had grounds at Sixty-seventh Street and the East River, where I quickly developed as a runner. I became captain of the club and was its champion sprint runner in 1889, when a new member joined by the name of Ehrich Weiss, who later became famous as Harry Houdini, the magician and escape artist.

As Weiss was ambitious to win a running prize, he turned to me as captain for advice, and under my instruction he trained and won his first prize.

At the time, Weiss (or Houdini, as I shall henceforth call him) was making and lining ties at a low wage for H. Richter's Sons. His ambition to be a boy magician was curtailed by lack of funds for the purchase of paraphernalia, for performances he gave after working hours at small social affairs and in public schools.

When Houdini learned that I was a magic fan and a friend of the Herrmanns, we became good pals.

In the spring of 1889 Houdini has another friends in his shop, named Jacob Hayman, who was a magic fan, and they frequently worked together, giving amateur magic performances.

On April 30, 1889, Houdini informed me that he and Jack Hayman were booked to give a magic performance at some social affair. "I guess we'll make a flop of it," said Houdini ruefully, "because we haven't enough paraphernalia."

"Oh, I can remedy that," I said, "Come over to Martinka's with me and I'll make you a present of some magic apparatus. Consider it my Christmas present," I added, as Houdini was quite proud and touchy about money matters."


As this is before Houdini's exposure to Robert-Houdin, I wonder what named he and Jack used at what sounds like their first professional engagement?

Later in the book, Rinn recalls when his friend read that seminal work of magic and truly set off to become a professional magician:

It was early 1891 that Ehrich Weiss read The Memories of Robert Houdin, the French magician, and determined to become a professional magician under the name of Harry Houdini, which name he legally made his own at a later date.

A short time after he made his decision, he said to me, "I've made up my mind, Joe, to quite my job and become a professional magician under the name of Harry Houdini."

"But Ehrich, you are only seventeen," I protested. "Isn't that rather young to give up a good job for an uncertain theatrical career?

Houdini replied, "It may seem daffy to a solid businessman like you, Joe, but I've the urge in my blood to be a professional magician and nothing can stop me."

"Well, it's your funeral, Ehrich," I said resignedly; "but get a recommendation for your present employer in case you can't make a success of being a magician."

A few days later Houdini saw me and reported: "Well, I've quit my job, Joe. I followed your advice and got a recommendation. Here it is." I read the letter, which I now possess.

We hereby certify that Mr. Ehrich Weiss has been in our employ for two years and six months as assistant lining cutter and we cheerfully recommend him as an honest, industrious young man.


It's interesting that this oft quoted recommendation letter found its way into Rinn's collection. He doesn't say how he got it, but I can imagine Houdini giving to it to his friend once he had achieved fame as The Handcuff King. Maybe he even gave it to him as "a Christmas present."