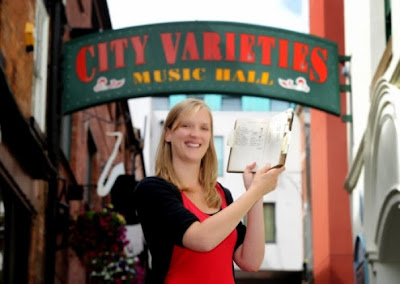 The Yorkshire Evening Post has an article about the recent restoration of the historic City Varieties music hall in Leeds, and the discovery of some interesting artifacts concealed beneath the floorboards. The article by Chris Bond kicks off with a nice mention of Houdini in a recently uncovered ledger:

When Harry Houdini appeared at Leeds City Varieties way back in 1904, he was arguably one of the most famous people in the world.

Getting the great “Handcuff King” to perform at the venue was a major coup and they paid the legendary escape artist £130, 18 shillings and six pence (roughly £7,500 in today’s money) - the most anyone had ever been paid to appear at the theatre.

Houdini’s performance was described by the theatre’s manager as “extra special” which he’d written in big, bold letters in the records book kept at the time.

It’s a fleeting glimpse into the rich heritage of the City Varieties and just one of the fascinating snippets of information that have been unearthed as part of an ongoing project following the theatre’s £9.9 million renovation which was completed two years ago.


You can read the full article at The Yorkshire Evening Post.
Written by John Cox at 12:22 PM