Houdini gets tipsy this Tuesday 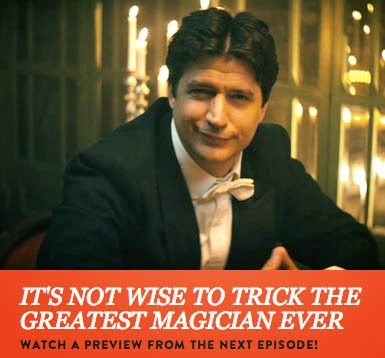 Houdini may have been a committed non-drinker, but he's going to get thoroughly blasted on Comedy Central's Drunk History this Tuesday, August 13. The series, created by Derek Waters, features drunk storytellers talking about history while well-known actors perform their inebriated version of events. It's pretty funny stuff.

Drunk History's Tuesday episode is called "Detroit" and will have a segment about Houdini and Spiritualism. Houdini is played by Ken Marino and Alfred Molina plays Sir Arthur Conan Doyle. I don't know who the selected storyteller is, but he'll be drunk!