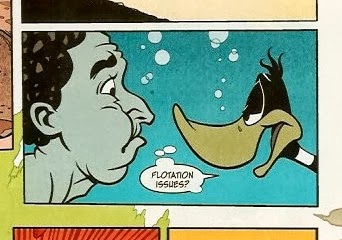 In the fertile world of Houdini fiction, the Handcuff King has been teamed with the likes of Sherlock Holmes, Doctor Who, Dracula, and even Batman. But I believe this is the first time he's ever met a member of the Looney Tunes. Here's the description of the just released LOONEY TUNES #214 from DC Comics: 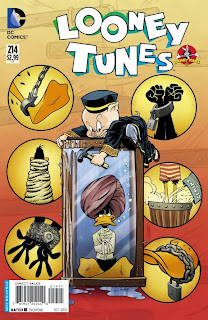 In "The Great Houducky," a high-stakes tale of escape and adventure, Daffy crosses paths with legendary Harry Houdini and transforms himself into the Great Houducky! Taking the stage in chains and weights and locking himself in a towering box, it’s up to the Great Houducky to escape with all his feathers intact. Or will it be up to trusty sidekick Porky Pig to break him out in time?

Next, in "Liquid Dumber," Porky Pig has a clogged drain and it’s up to ACME products to unclog it! Daffy soon shows up to help, bringing more than drain cleaner to clean the pipes.

Finally, in "Montezuma’s Revenge," Speedy Gonzalez and the Tasmanian Devil team up to cook a hot sauce that sets Daffy and Porky on a jungle adventure for lost treasure.


You can buy LOONEY TUNES #214 featuring "The Great Houducky" from Midtown Comics.