The following article dated November 24, 1996 comes from the archives of The New York Times. I thought I'd archive it here as well. What I find interesting is the mention of the grave markers belonging to the last surviving Weiss siblings, Gladys and Leopold. To this day they are still missing from the plot. Were they indeed "sold off to collectors" as the article says some S.A.M. members suspect?

Check out WILD ABOUT HARRY tomorrow when I will provide the answer. 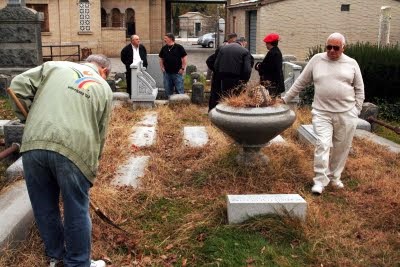 Houdinis' Plot Is Cleared Up, and Then Thickens
By CHARLIE LeDUFF
Published: November 24, 1996
Correction Appended

It's a mystery, with a little touch of sleight-of-hand.

After years of neglect and mindless vandalism, the final resting spot of the world's greatest escape artist, Harry Houdini, is finally getting a face lifting.

Two granite benches that were smashed to pieces in 1993 have been replaced this year. The enormous family monument has been cleaned and patched up, the granite crypt covers restored and the tomb foundations rebuilt.

The question is, whodunit?

Credit for the restoration of the 24-person family plot in Machpelah Cemetery in Ridgewood is a bone of contention between the Society of American Magicians and the operator of the cemetery, David Jacobson. The two parties have been bickering since Mr. Jacobson barred the society three years ago from performing a "broken wand" ritual on Oct. 31, the anniversary of Houdini's death. In the ritual, a "magic wand" is broken to symbolize the end of the magician's power.

The society claims to have raised $25,000 for the reconstruction of the crypt, most of it donated by David Copperfield, the illusionist.

"We did it to honor Houdini, who did the same for other magicians," said John Bohannon, president of the Parent Chapter of the Society of American Magicians in New York.

Houdini, a founding member of the society and president of the New York chapter, was known to visit the grave sites of magicians and often paid for their upkeep.

"Houdini made sure that other magicians' graves were respected and repaired," Mr. Bohannon said. "It's ironic this happened to him."

The cemetery's operator scoffed at the suggestion that the society paid for anything more than the reconstruction of the foundation pads, at a cost of $749, and the new granite benches.

"The Society of American Magicians never paid the cemetery for any restoration of the Houdini family plot in my tenure since 1988," Mr. Jacobson said.

The money came from the dwindling funds of the Machpelah Cemetery, he said.

The site is the final resting place of Houdini -- he was born Erich Weiss and grew up in Harlem -- along with his wife, his mother and 21 other relatives. Houdini is entombed in a bronze coffin, the same one he used for an escape stunt on his final tour. The granite monuments of Houdini's sister, Gladys, and brother, Leopold, are missing. Some members of the society say they believe that Mr. Jacobson has hidden them, or worse, sold them off to collectors.

"I have them," Mr. Jacobson replied. "They are broken and I'm looking for someone to restore them."

Houdini did not return calls.

Correction: December 15, 1996, Sunday An article in the Neighborhood Report on Nov. 24 about the tomb of the magician Harry Houdini, in Machpelah Cemetery in Queens, misstated the number of people buried in the Houdini family plot. There are 10, not 24. The article also misstated the burial place of Houdini's wife. It is Gate of Heaven Cemetery in Hawthorne, N.Y., not Machpelah. The article also misidentified the Manhattan neighborhood where Houdini lived as a teen-ager. It was Yorkville, not Harlem. And the article included an outdated reference to John Bohannon, a member of the Society of American Magicians, which maintains the Houdini grave site. He is a former president of the society's New York chapter, not the current president.


You can read more about the controversy involving the upkeep, or the lack thereof, of Houdini's family plot HERE.