Yesterday I posted a 1996 article from the New York Times about the troubled upkeep of Houdini's grave. The article mentioned the headstones belonging to Houdini's siblings Leopold and Gladys which have not been seen since they were damaged by vandalism in 1993. The Times article stated that "some members of the Society [of American Magicians] say they believe that Mr. Jacobson has hidden them, or worse, sold them off to collectors."

Well, that's not true, and here's the proof. Here are the headstones as photographed by our friends Dorothy Dietrich and Dick Brookz of the Houdini Museum in Scranton. David Jacobson, the manager of Machpelah Cemetery (which went bankrupt in 1987 and is now state owned), has kept them safe in storage until funds can be raised to have them replaced. 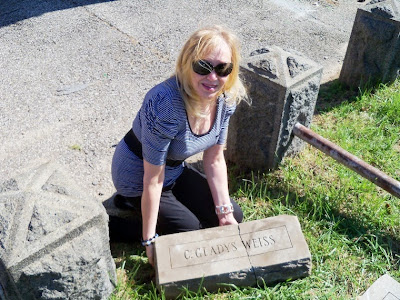 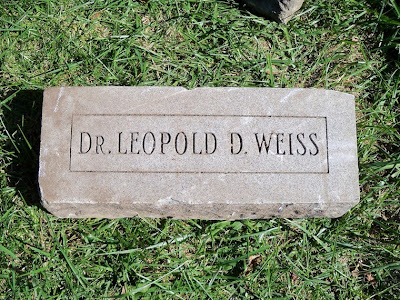 The obvious question is why the stones weren't replaced during the 1995 restoration with the $25,000 raised by the S.A.M. with the help of David Copperfield and James Randi? Unfortunately, I don't have the answer to that, and the S.A.M. no longer provides money for the upkeep of Houdini's grave. There has also been some recent friction among the parties who have in the past looked after the plot, so at the moment there are no plans to restore these markers.

Hopefully a way to raise the necessary funds will be found and Gladys and Leopold will get their headstones back in place. It's really a shame that these graves have remained unmarked for 20 years. In fact, we are in danger of a generation not even knowing that Gladys and Leo are buried with their family and big brother Houdini. 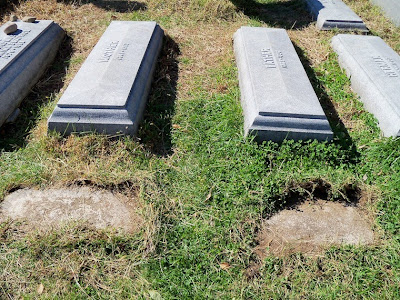 Thanks to Dorothy Dietrich and Dick Brookz of the Houdini Museum in Scranton for allowing me to share these photos.
Written by John Cox at 8:07 AM