This one slipped past me when it was released back in April, but it appears you can now get a printed version of Clifford Riley's The Houdini Escape in this collected volume, The 39 Clues: The Cahill Files: Spymasters. Riley's short Houdini adventure was released last year only as an eBook. Here's the description on Amazon: 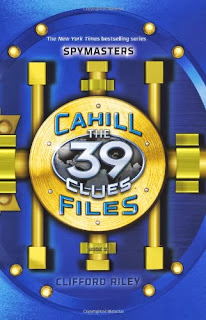 Three amazing adventure stories from the Cahill vault! Read at your own risk.

In 1814, redcoats burned the White House to the ground. In 1889, Harry Houdini discovered a trick that would save his life. In 1955, the U.S. launched the world's first nuclear submarine. And one family pulled the strings behind the scenes at each of these events: the Cahills--the most powerful family the world has ever known.

Now the Cahills have opened their vault and dangerous secrets are pouring out. This volume contains three stories previously-published as ebook adventures, THE REDCOAT CHASE, THE SUBMARINE JOB, and THE HOUDINI ESCAPE, three stories that will change history as we know it forever. Flee alongside a young Cahill as Washington burns, unlock Houdini's magic, and stow away with young Fiske Cahill on a desperate mission that could cost him his life.

Venture into the vault if you dare. But don't say we didn't warn you.


Purchase The 39 Clues: The Cahill Files: Spymasters on Amazon.

UPDATE: Now that I have this in hand, I can add that it has a nice photo of Houdini on the front and back endpapers.
Written by John Cox at 7:38 AM