Let's kick off our new Hinson Endowment today with what I'm deeming to be the greatest signed Houdini photo EVER. Why do I say that? Well, for starters, Houdini has inscribed this beautiful cabinet photo (which is a rare image in itself) in German. That makes this one of the very few examples of his use of the family language. He's also signed it with his real name, Ehrich. Again, only a handful of Ehrich (Weiss) signatures exist.

But what really makes this special and a major piece of Houdiniana is the fact that Houdini has inscribed this photo to his mother. Apart from the famous "Dear Ma" postcard of his youth, this is the only piece of writing from Houdini to his mother that I've ever seen. Boom. 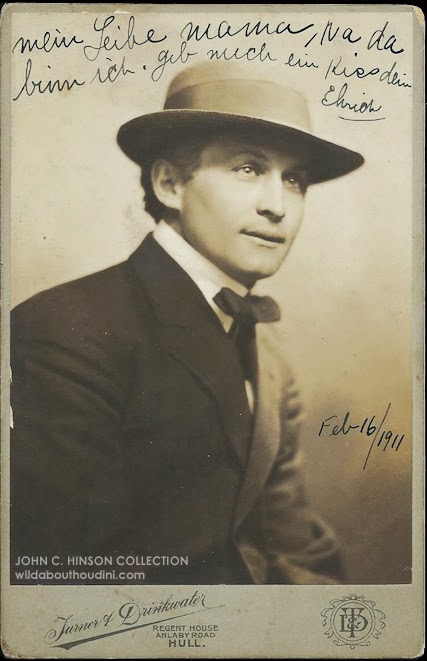 So what does this greatest EVER inscription say exactly? That's not entirely clear, even to our benefactor, John Hinson. So I turned to a German friend, Helmut Schierer from Nuremberg, who gave me his take. Says Helmut:

It's a bit strange, sounds like somebody not having used his German for some time and not being overly concerned about orthography. It's a mix of German and English and makes a - slight - mistake, mixing dative and accusative as Berliners are prone to. It says:

'My Daer Mama, well here I am. Give me (here he used the wrong grammatical case) a kiss your Ehrich.'


Thanks to Helmut for the translation and, of course, to John C. Hinson for allowing me to share this rare family treasure. We're off to great start!
Written by John Cox at 11:04 AM