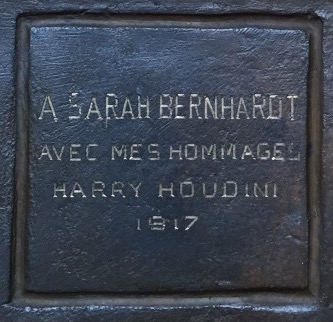 In December 1916, Houdini came to the rescue of actress Sarah Bernhardt. The famous French theater star had been presented with a bronze cast of herself on behalf of the "Actors of America," but then later billed for it. Unable to pay the bill, the actress had to return the gift with great embarrassment. Houdini swept in and paid the bill on her behalf, and his generosity paid him back in publicity.

It's a story that always gets a mention in major Houdini biographies, but the bronze itself has remained somewhat of a mystery. What ever happened to it? That mystery is now solved in a nice post at the Houghton Library Blog. They not only tell the story of the bronze, but also have a photo of it from the Harvard Theatre Collection. So click the headline above and read all about "Houdini’s bronze of Bernhardt."

Thanks to ​Dale Stinchcomb.
Written by John Cox at 7:11 AM