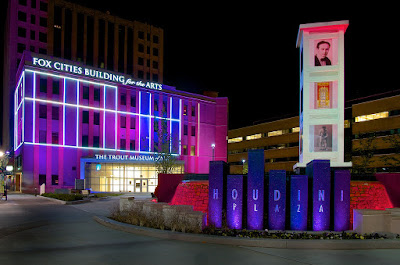 Today it was revealed that the city of Appleton, Wisconsin, will be adding a life-size Houdini bust to their downtown Houdini Plaza. The bust will be made of bronze and show Houdini from the torso up doing a straightjacket escape. It will be accessible so people can take pictures with it.

Sculpture Valley, of Appleton, spearheaded the effort to guide the bust design and find a permanent place for this exquisite new work near the site of Houdini Plaza's former abstract piece, “Metamorphosis". The new sculpture will fill the void left in the new plaza design which called for a piece of public art but was conspicuously missing from the final execution.

Sculpture Valley is also working alongside Tom Boldt, president of the Boldt Company and a devoted Houdini fan, on a new series of Houdini walking tour markers to add more depth of history to the current set of makers Boldt placed back in 1986 mostly along College Ave.

The new bust and the new markers will be officially unveiled on the weekend of August 27-29th when the Houdini Club of Wisconsin comes back to Appleton to host their annual convention at the Raddison in downtown Appleton.

You'll be able to get an early look at the new Houdini bust on the HISTORY channel reality show Monument Guys next Wednesday, May 20. The show follows the inners workings of The Crucible bronze foundry in Norman, Oklahoma, who cast the bust.

Houdini Plaza, which was once said to be the site of the former Weiss family home (we now know it was a few blocks away), underwent a massive renovation in 2013.

Thanks to Alexander Schultz of Sculpture Valley.