The Medium Who Baffled Houdini -?

The Medium Who Baffled Houdini is a new book about Mina "Margery" Crandon by Elaine M. Kuzmeskus. Considering the title and the fact that the author is a spirit medium herself, I expect this book has some bias. But Margery is a fascinating subject and I'm interested to give this a read. Here's a description. 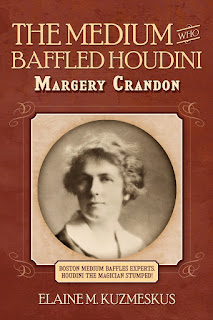 "Houdini the Magician Stumped," proclaimed the Boston Herald in 1924. Who was this medium who baffled Houdini? None other than Margery Crandon, the wife of a prominent Boston surgeon. "Margery the Medium" made headlines throughout the 1920s. She captivated not only Harvard professors, but the editors of Scientific American with her amazing physical mediumship. Margery was very much a woman of her time- the Roaring Twenties. By the time the Twenties were in full swing, Margery and her second husband Dr. Le Roi Crandon became interested in psychic phenomena. In May of 1923, Dr. Crandon invited two couples to join them in a table-tilting séance. During the evening, he discovered that his wife had a genuine gift for communicating with the spirits. Within months, Margery produced psychic music, direct voice, trumpet séance, and even apports. She not only fascinated her husband, but the scientific community in the United States and England. While Sir Arthur Conan-Doyle championed Margery's mediumship, Harry Houdini denounced her as a fraud. Was Margery Crandon too good to be true or was she the last of the great physical mediums?


Of course, Houdini was not "baffled" by Margery, although he acknowledged that she was a very "slick" medium. Houdini ultimately explained all her phenomena and prevented Margery from collecting the prize offered by the Scientific American for proof of genuine mediumship.

In October, David Jaher's eagerly anticipated new book, The Witch of Lime Street: Séance, Seduction, and Houdini in the Spirit World, will be released, and I expect it will be the definitive Houdini-Margery study.

Purchase The Medium Who Baffled Houdini at Amazon.com (U.S.) and Amazon.co.uk (UK).