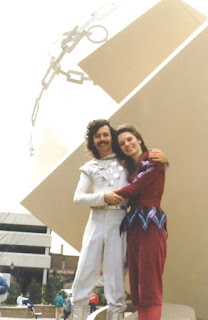 Today is the 30th Anniversary of Appleton's Houdini Plaza. The plaza was dedicated on May 25, 1985, in a celebration that featured magic performances by members of the Houdini Club of Wisconsin.

The original plaza design centered around an abstract sculpture created by Richard C. Wolter called "Metamorphosis." The original dedication plaque said the plaza was built on the site of the Weiss family home, but that claim has been dropped in recent years.

In 1986, the great Doug and Debbie Henning (right) performed their famous quick-fire version of Houdini's Metamorphosis in the plaza center. You can see a clip of that performance in the 1988 documentary, Houdini: The Greatest Illusionist of All Time.

Houdini Plaza was completely renovated and rededicated in 2013. In August, a spectacular new bronze bust will be installed in the heart of the plaza celebrating Appleton's favorite son.