YES!--"Jim Collins is still with me"

Here's an add-on to my post yesterday about Jim Collins and his "solo career." While researching that post, I found this terrific Hardeen-Hellzapoppin ad in the October 1938 issue of The Sphinx. There's a lot to like here, but note the line at the bottom, YES!--"Jim Collins is still with me."


I expect this was an inside joke. Perhaps this was the question Hardeen was repeatedly asked by fellow magicians? It speaks to just how popular a figure Jim Collins was in the magic world. Collins, of course, worked as Houdini's chief assistant and engineer for many years.

Hellzapoppin was a madcap comedy revue show starring the popular Olson and Johnson. Hardeen appeared in it for four years. Unfortunately, he did not appear in the 1941 film version.

I also found this news item in the March 1938 issue of The Sphinx. This is the first I've heard of this accident, and I'm afraid I don't have any other details. 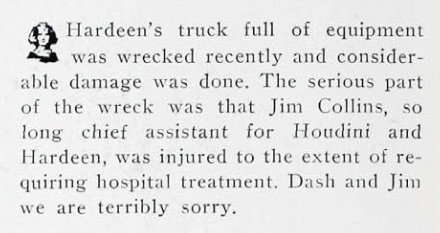 Jim Collins was recently portrayed by Evan Jones in the Houdini miniseries. Unlike what was shown in that movie, he was not a southern-fried bumpkin from Macon, Georgia. Jim Collins was born in the UK. He died in Philadelphia on March 6, 1942.