Check out what appears to be an audition by actress Maddie Phillips for the role of Adelaide in the new series Houdini & Doyle (which I think is now safe to assume is definitely happening). It was uploaded a month ago to Vimeo by BC Buzz.


[UPDATE: The video has now been put behind a password wall.] 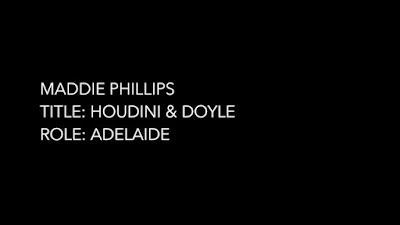 Houdini & Doyle is a fictional series that teams up Houdini and Sir Arthur Conan Doyle solving paranormal mysteries. The series will air on FOX in the U.S., ITV in the UK, and by Shaw Media in Canada. No air date has yet been announced.