History was made last night at the Franke Center in Marshall, Michigan, when escape artist "Hatari" (a.k.a. Joseph Patire) freed himself from a genuine Houdini-Hardeen Milk Can on-stage in front of a live audience. The can belongs to the collection of the American Museum of Magic in Marshall, and was part of the International Stars of Magic show that concluded the Midwest Magic History Weekend.

I was honored to be among the committee that locked Hatari into the can. It was a thrill (and a little nerve-wracking) to handle and snap shut a real Houdini-Hardeen padlock. Also on stage was mega-collector Arthur Moses. Among the many magic luminaries in the audience that witnessed the escape were Bill Kalush, author of The Secret Life of Houdini, and legendary illusion maker John Gaughan. The show was emceed by the great Mike Caveney.

Before the escape, a video was played that explained the history of the escape, as well as the history of the Houdini-Hardeen can that was to be used that night. One bit of historical serendipity was that the night happened to be the 70th Anniversary of the last night that Hardeen himself performed the escape. Believe to or not, this was not known by organizer David Charvet when all this was planned! Just another one of those spooky Houdini coincidences.

The theme music from the horror classic Halloween played while the can was concealed by a raised curtain. A large stage-side clock counted down the minutes. A loud screen by Hatari's assistant helped bring the drama to a crescendo. Hatari freed himself in just under two minutes and received a nice ovation.

Now, I need to let you know that the Milk Can was not actually filled with water. The museum decided that would pose just too much risk to this important Houdini artifact. While this wasn't announced to the audience in advance, it also wasn't kept secret. Following the escape, host Mike Caveney quipped, "Not only did Hatari escape, but he was able to blow-dry his hair -- a feat not even accomplished by The Great Houdini!"

I think leaving the can empty was the right call. The performance was staged very effectively, with Hatari clad in a period bathing suit on a stage filled with nice "undersea" lighting effects, and it all worked as beautiful recreation of this historic escape without posing any real danger to the can or Hatari himself. 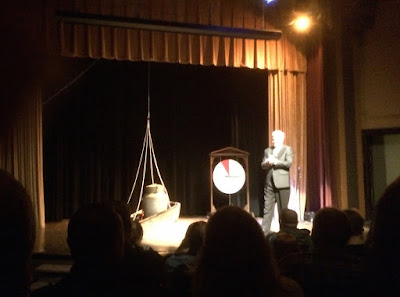 Immediately after the escape (which occurred mid-show before the intermission), the Milk Can was whisked back to the American Museum of Magic under the constant care of the museum's administrator, Keli Spears Hindeach, who seemed very happy and relieved to have her can back safely "at home."

It was a truly magical night and a wonderful tribute to this classic Houdini-Hardeen escape.

Events at the Franke Center are still going on today with a Potter & Potter auction of rare magic books and memorabilia. You can continue to follow my live tweets from Marshall HERE.

I'll have a full report on the Midwest Magic History Weekend later this week.