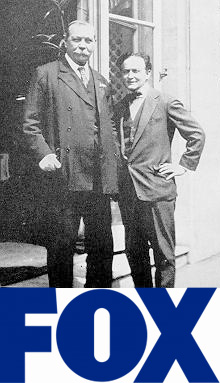 This week U.S. television networks announce their schedules for the next year. There had been speculation that FOX would announce Houdini & Doyle as one of their new dramatic series for next year, but that didn't happen today. There was no mention of the series on FOX's new lineup for Fall 2015-2016.

FOX did announce the return of The X-Files as a six episode "event series." Perhaps because Houdini & Doyle has been described as a "Victorian X-Files", the network didn't want the two similar shows running concurrently?

Despite this, there is evidence that the series is going forward with the hiring of a production designer Arwel Jones and casting. When Sony Television sold the series last March, ITV in the UK and Shaw Media in Canada also picked it up for distribution, so it's possible we will still see the series later this year or next, just not in the U.S.

It's also possible Houdini & Doyle will show up as mid season replacement on FOX, or it will be announced as a new series for the Fall 2016-2017 season. There is also the hopeful note at the end of the official press release: "Additional schedule information to be announced."

As with all the other potential Houdini TV and movie projects, I guess we will just have to wait and see.

In the meantime, if you care to read about the real-life relationship between Houdini and the creator of Sherlock Holmes, I would recommend Christopher Standford's superb study, Masters of Mystery: The Strange Friendship of Arthur Conan Doyle and Harry Houdini.

UPDATE: It's on! Michael Weston and Stephen Mangan are ‘Houdini & Doyle’