Yesterday was the 90th anniversary of Houdini's death, and Harry made his presence known! Well, in a way. Reports from New York, Marshall, Danville and Milwaukee say Houdini stayed silent during the annual seances, but Houdini was alive in the media.

A few stand out pieces ran in Inc., the Omaha World-Herald, the Stamford Advocate, the Providence Journal and the BBC (I'll cover some of these in individual posts). The Magic Detective, Houdini Museum, Harry Houdini Circumstantial Evidence and Houdini & Hardeen also featured nice Houdini tributes.

This year I decided to mark the occasion by revealing the long lost Houdini-Hilliar code, which we now know was: "Semper Idem." But my blog wasn't the only place this message was received! Here's a little postscript to my Halloween post. 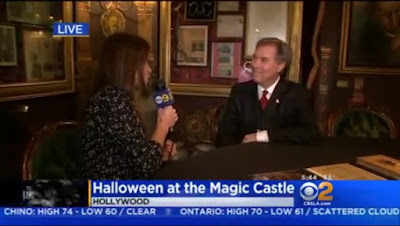 Early in the morning, I went to the Magic Castle in Hollywood to take part in a live Halloween broadcast on local CBS news with Stephanie Simmons. I was there as the "Houdini Historian" along with magician Rob Zabrecky and magician/medium Misty Lee.

While waiting to shoot my segment in the Houdini Seance Room, I perused the display cases and read a letter that I hadn't really given much attention to before. It was written by Houdini in 1918 to Edwaun Fay Rice, curator of the Boston Public Library, and in it Houdini mostly complains about the expense and difficulty of heating 278 in winter.

But check out how he signs off at the end!

We hear you, Harry.

Hope you all had an enjoyable Halloween/National Magic Day. I think the day once again proved that HOUDINI LIVES.