Houdini gets The Simpsons treatment 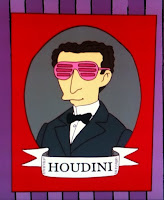 I'm happy to report that Houdini played a big part on last night's magic-themed episode of The Simpsons.

Titled "The Great Simpsina", the season 22 episode finds Lisa stumbling into the dilapidated home of The Great Raymondo (voiced by Martin Landau). After some convincing, she learns magic from the old magician, and also discovers he was given the Milk Can escape by Houdini himself (the Can is hidden inside a secret room accessible when you tip a Houdini bust).

Lisa learns to do the daring escape, but inadvertently reveals the method to the much-hated Cregg Demon, a pretty funny send up of Criss Angel. Demon claims Houdini's spirit passed him the secret, and makes it a part of his show with his own ultra-tacky presentation ("I hope you're watching up there, Houdini bro. I did your great grand niece."). I won't reveal the end, but know that David Copperfield, Ricky Jay, and Penn & Teller all put in appearances, voiced by themselves.

It was a pretty good episode with lots of references to Houdini and some nice inside magic jokes. One thing -- the method of the Lisa's Milk Can is revealed. While it's not exactly how Houdini's can worked, I wouldn't be surprised if this touched off a bit of controversy in some magic circles. Teller is credited as the Magic Consultant for the episode.

"The Great Simpsina" is available for purchase on Amazon and iTunes, or you can watch it for free on Hulu. Lisa is also featured on the cover of this month's MAGIC magazine.
Written by John Cox at 7:43 AM