Today I continue my look back at musicals that have celebrated the Master Mystifier. Last week we hit the London stage with Man of Magic (1966). Today we're off to the opera!

Houdini, A Circus Opera debuted at the Carre Theater in Amsterdam on September 29, 1977. It was a theater that Houdini himself had performed in. Part of the play was staged inside a circus ring (the theater had to clear out stalls to accomplish this), and the pre-show atmosphere was enhanced with fire eaters, clowns, and film footage of Houdini flying his Vision biplane. Music was by Dutch composer Peter Schat with a libretto by British writer Adrian Mitchell.

A true novelty of the show was that Houdini was played by three different men in the course of the evening. Tenor Jerold Norman -- who in makeup looks strikingly like Houdini -- sung the role of Houdini in the dramatic scenes. Clint Farha played Harry in the dance numbers. British escape artist Howard Peters performed Houdini's escapes, which included a suspended straitjacket, the Milk Can, prison cell, iron box, and the Water Torture Cell.


In August 1979 Houdini, A Circus Opera traveled to the U.S. where it played as a special feature at the Aspen Music Festival in Aspen, Colorado. The show was ideally suited to the venue, as the stage for the Aspen festival was inside a giant circus tent.

For this U.S. production, Daniel Lordon took over as the dancing Houdini while Mark Mazzarella took over the escape artist role from Howard Peters. Mazzarella was only 19 at the time and had dropped out of the University of Hartford to star in the show. He touted himself as the youngest magician to ever escape from Houdini's Water Torture Cell. Walter B. Gibson was brought on to work with Mazzarella, and Sidney Radner loaned several authentic Houdini escape props to the production.

During the first performance, a power outage occurred during the finale in which Bess (played by Vivian Thomas in the U.S. production) tries to contact Houdini. Time magazine quipped that it caused a "brief, wild surmise that Bess had succeeded." The show had to be concluded via the headlights of an automobile that was hurriedly moved to the rear of the tent. Audience members also helped out with flashlights that they aimed at the stage. The New York Times noted, "It was not a planned effect, but it added to the fun."

While reviewers gave high marks to Mazzarella's escapes and the lavish production, the music was largely panned (the same fate that befell Man of Magic). The New York Times said "almost everything about Houdini was attractive except the music." Time magazine complained that "both the music and text were upstaged by the magic" and "Houdini offered almost no plot, almost no human interplay."

Following Aspen, Houdini A Circus Opera played one last run back in Amsterdam in 1981. A television recording of this second production at the Carré Theatre was done by the National Theatre Institute.

Houdini A Circus Opera spawned a fair amount of collectible merchandise, including a three album box set (below), a paperback edition of the libretto illustrated with photos of the real Houdini, and a few different style posters, one of which hung in The Magic Castle for many years. 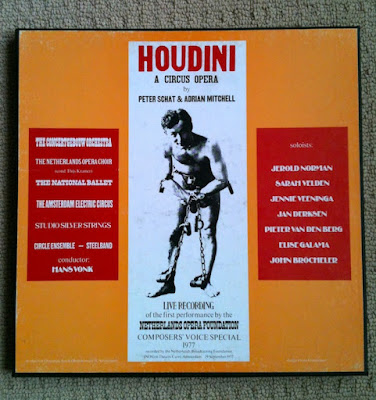