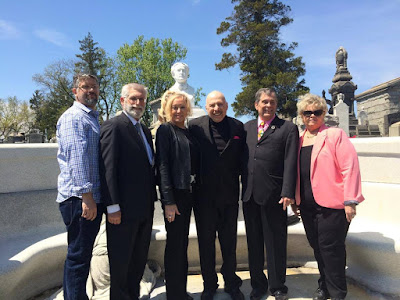 The Society of American Magicians, through the generosity of the S.A.M. National Endowment Fund, held a rededication of the Houdini gravesite today. National President Dave Bowers gave a speech praising the cemetery caretakers along with Dorothy Dietrich and Dick Brooks for their efforts to restore and preserve the gravesite. About 20 people were present, including officers and Past Presidents of the S.A.M. Also present were members of the Parent Assembly 1 and members from Philadelphia and Connecticut.

The S.A.M. will now concentrate their efforts on removing rust stains from the exedra and repairing and restoring the S.A.M. logo mosaic.

Past National President Bruce Kalver, who was kind enough to provide details of today's event and these photos, tells me: "You would have loved being there. It was historic and touching." 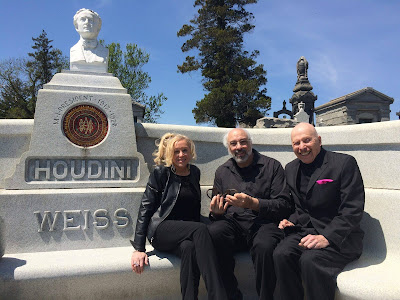 Bruce Kalver with Dorothy Dietrich, Dick Brookz, and a pair of Houdini handcuffs.

It was 100 years ago this October that Houdini dedicated the gravesite in the memory of his parents. Houdini was president of the S.A.M. from 1917 until his death in 1926.