Looks like I didn't need to keep my secret for long! The Science Channel has officially announced their upcoming docuseries Houdini's Last Secrets. I just returned from Fort Worth where I had the great pleasure of shooting a segment for the first episode with George Hardeen below. (And now you know what was in the bag!) 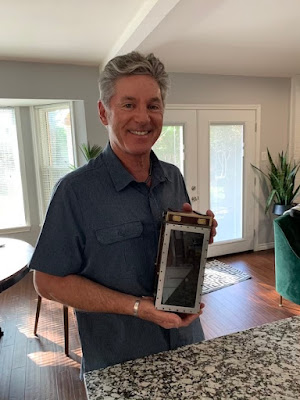 THE SCIENCE BEHIND HISTORY'S MOST ICONIC ILLUSIONIST

Magicians, past and present, marvel at the death-defying performances of the legendary Harry Houdini. His breathtaking escapes and astonishing illusions have never been equaled, or fully understood. With the help of skilled engineers, accomplished illusionists, and a member of his own bloodline, a new Science Channel series looks to uncover the methods to Houdini's magic and madness. HOUDINI'S LAST SECRETS, a four-part series, premieres Sunday, January 6 at 10 p.m. ET/PT.

Catching a speeding bullet, being buried alive, submerging himself in a water torture cell. How did the world's greatest showman pull off such death-defying stunts? His talents allowed him to become one of, if not the biggest celebrity in the world. Those same unique skills, along with the company that he kept, led some to believe that he was an informant for the top U.S. and European spy agencies during World War I. Helping piece together clues and testing out his most daring stunts are Houdini's grand-nephew George Hardeen, magician and daredevil Lee Terbosic, and master stunt builder Steve Wolf. With access to the master illusionist's personal scrapbooks, letters, and pictures, they look to uncover the science of Houdini's stunts as well as the myths behind his legend.

"Harry Houdini is the definition of mind-blowing," said Marc Etkind, General Manager of Science Channel. "He was clearly ahead of his time when it came to using engineering to accomplish his stunts, so much so that his methods continue to be debated by today's master magicians. It's no wonder that just the name Houdini still stirs the imagination of people, nearly a century after his death."

Each episode will be centered around one of Houdini's most daring stunts. The premiere looks at Houdini's famous water torture cell escape to unmask the potential methods he may have used, and what the dangers involved could have been. He performed this feat many times in Washington D.C., where President Woodrow Wilson was rumored to often sneak over to watch Houdini. Other episodes focus on The Siberian Transport stunt, catching a bullet, and his escape from being buried alive.


So it looks like Houdini's Last Secrets will be the first big Houdini event of 2019. I can't wait!