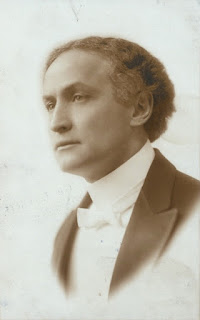 Today is Houdini's other birthday. While we now know the great magician was born on March 24, 1874, Houdini himself always claimed his date of birth as April 6. In fact, it's possible Houdini didn't even know his real birthday.

Why this confusion exists is not clear. Some put it down to the differences between the two calendars that were in use in Hungary and America at the time. It's a good, practical explanation. But I suspect there was more to it. The real answer may be in letters from his mother, but that evidence is, literary, buried with him. All we have are Houdini's own words, written to his brother on November 22, 1913, not long after his mother's death:

Re the Birthdays, I shall celebrate mine? always APRIL 6th.

It hurts me to think I cant talk it over with Darling Mother as SHE always wrote me on April 6th, that will be my adopted birthdate.


April 6 remained Houdini "official" birthday until the late 1950s when the evidence of his birth certificate (discovered in 1932) become wildly disseminated, and William Lindsay Gresham marked March 24 as his true birthday in his seminal biography, Houdini: The Man Who Walked Through Walls

. Today the date has become firmly established, and April 6 has largely faded from history.

But April 6 was the day Houdini himself celebrated his birthday, and the date clearly held great personal significance for him. And if Houdini is able to look down and see if he's still remembered on his birthday, today is the day he will do it. So on this day I still say...