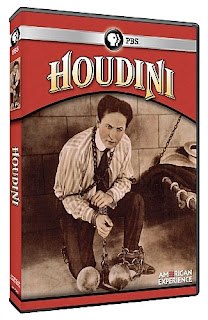 The PBS American Experience documentary HOUDINI is released today on DVD. It was first broadcast on January 24, 2000, and until now has only been available on VHS

Hosted by David McCullough, the hour long documentary was made by WGBH and includes interviews with David Copperfield, James Randi, Ken Silverman, E.L. Doctorow, Dorothy Young, and even artist Al Hirschman, who knew Houdini and talks about being invited to punch him in the stomach in his dressing room (and "hurting my hand").

One thing I really like about this particular doc is it doesn't fall into the familiar narrative trap of transitioning from his mother's death to his anti-spiritualist crusade, thereby lopping out 10 years of his life and his entire movie career. This documentary tracks his career accurately. This documentary also features several unpublished photos, including a shot of Houdini standing in his Milk Can in handcuffs that I've never seen before (below). 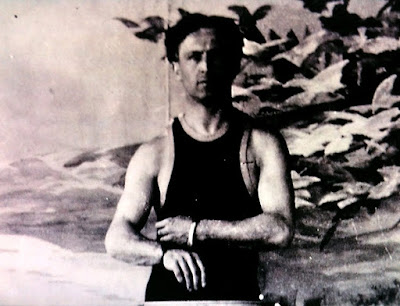 HOUDINI can be purchased from Amazon.com

or the Shop PBS website.
Written by John Cox at 7:46 AM