The true date of the Jess Willard encounter 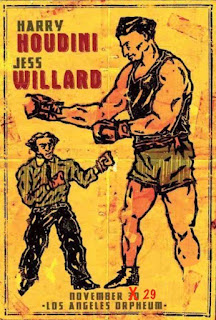 Every biography tells the story of Houdini's contentious encounter with heavyweight champion Jess Willard at the Los Angeles Orpheum in 1915. The incident even opens the newest book, The Life and Afterlife of Harry Houdini by Joe Posnanski. And the date always given is November 30th.

But I recently found evidence that this actually took place on November 29th (Houdini's opening night). First and foremost are two reports from the Los Angeles Daily Times and the Long Beach Press (below), which are the earliest accounts of the incident that I'm aware of. Both ran on November 30th and both state that it happened "last night", which would be Monday the 29th. The Los Angeles Herald also ran a small blurb about it on the 30th.

Heck, just the existence of these disproves the November 30th date as these stories appeared before Houdini even took the stage that night.

So why does everyone cite Tuesday, November 30? I believe it's because everyone uses the Los Angeles Record as their source. This is the account that was widely syndicated and used in Variety. It also appears in Houdini's pitchbooks (below). As with the other stories, the Record states that it happened "last night." But the Record was late to the game, or maybe it took them a day to work up their more detailed account (likely with Houdini's input), and they did not publish until December 1st. This turned "last night" into November 30th and history was forever altered. 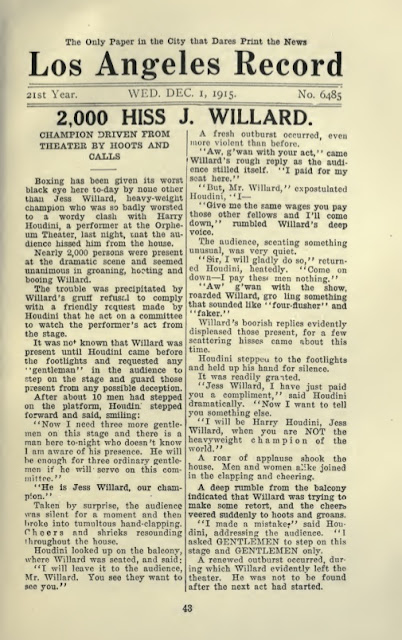 This wouldn't be the first time we've been fooled by a syndication dateline. I've discovered some papers would alter them, presumably to makes their reporting appear more current. One paper pushed the encounter to December 1st!

I'm continuing to seek evidence for and against this new date, but I feel confident enough to begin to using November 29, 1915 as the true date of the Houdini-Jess Willard encounter.

And if you don't like it, take it up with Jess! 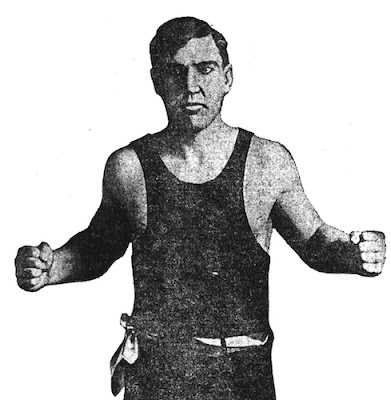 The poster artwork at the top of this post comes from The Pottawatomie Giant and Other Stories by Andy Duncan.