An interesting piece of Houdini history is set to be sold in Haversat & Ewing Galleries latest magic auction November 8-9. I'll let the auction description speak for itself. 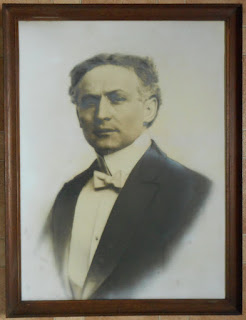 On March 19, 1913 the gathering place for the organization was officially recognized with a large crowd and much pomp and circumstance. With the press at hand, the organization's president Harry Houdini formally declared the club as being officially open! The Clubroom is where the Houdini portrait was hung in 1913 and where it would remain for decades. The early photo of the room (below) clearly identifies the Houdini framed image on the right hand side of the wall.

The Davenport Family acquired the famous portrait when they purchased Will Goldston's estate in 1949 and it has since been hanging at Davenport's Magic Shop. In original frame, does not contain glass. Portrait itself measures 26" x 19.5" - with frame 28.5" x22". This is a genuine and important piece of magic history, not to be missed. Est. $10,000-12,000 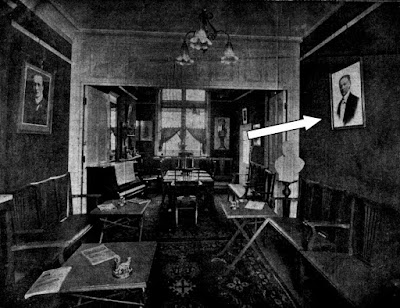 The auction includes several other nice Houdini lots from the Davenport Family/Will Goldston estate that can be viewed HERE.