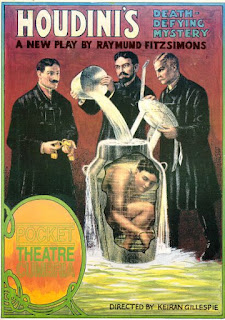 In the early 1990s a Houdini play ran in the UK called Houdini's Death Defying Mystery written by Raymund Fitzsimons. That name should sound familiar. Fitzsimons also wrote the 1981 Houdini biography, Death and the Magician, which has the distinction of being the only new Houdini biography published in the 1980s. For the longest time I knew nothing about this play, other than that it existed because I had found a poster online (right).

But now John Lovick (aka Handsome Jack) has shared with me an article penned by Fitzsimons himself for a 1992 Magic Circular that finally provided some details. It begins:

Last January I was commissioned by Pocket Theater, Cumbria to write a play about Houdini. Pocket Theater is a small professional touring company, with a national reputation for innovative productions. Their interest has been aroused reading my biography of Houdini, Death and the Magician.

I had told Karen Gillespie, the artistic director, that I had no wish to dramatize my book. I had in mind an original play, an imaginative interpretation of Houdini's life, in which the natural and supernatural would intermingle. I wanted to write an enchanted play, a magical play about a man of mystery, a man of secrets.

In the play I portray Houdini as the bravest and most conceited man in the world. He is also one of the most ambitious, expecting everyone who loves him – his wife, his mother, his brother – to play their part in helping him become the highest paid entertainer in vaudeville.

He succeeds in this ambition, and, in doing so, he becomes a legend, a symbol, a myth. Success excites him, but it haunts him too. He is haunted by the fear that his escape techniques could be of supernatural origin.

Houdini was played by Peter Gerald (seen right striking THE pose). Of his lead Fitzsimons says, "I believe Peter was destined to play this role, for an addition to the physical likeness there is a spiritual infinity. In rumpled evening dress or bathing suit, he is the personification of Houdini." Bess was played by Amanda Macdonald.

The play was directed by Keiran Gillespie with a score by Scottish composer Glenn Plukett. David De-Val was the escapology consultant.

I don't know how long the production ran. But I do know that it played at the Old Laundry Theatre in Bowness-on-Windermere, Cumbria in October and November 1992. It also played the Rudolf Steiner Theatre in London in February 1993.