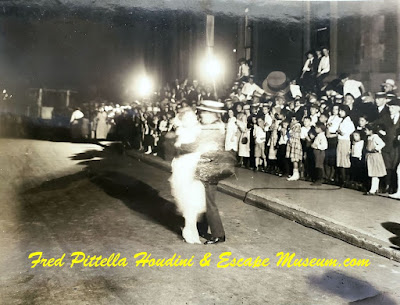 On January 6, 1922, Houdini wrote a peculiar letter to Sir Arthur Conan Doyle which, as far as I know, has never been discussed in the many books and articles written about the famous friends. The letter itself is reproduced in full in the 1932 book, Houdini and Conan Doyle: The Story of a Strange Friendship. Here it is in full:

My dear Sir Arthur Conan Doyle:--
Along with this letter I am sending you a photograph which I think will interest you.
This photograph was secured about four months ago, while my new photoplay called "Haldane of the Secret Service" was in the making. In this photoplay I portrayed the son of a murder high police official, and, in one of the scenes, but on my way from the Club, I meet a young lady who is running madly down the street before pursuing thugs. She runs in my arms for protection.
We had a cameraman on the scene, to make an instantaneous photograph of the action, and the result was the picture I am sending to you. This is not a trick picture, that I know. It is not a double exposure, how would you explain it? Does it look like ectoplasm?
The gentleman with the straw hat is your good friend Houdini. The girl, whose face is unfortunately turned away from the camera, is Miss Gladys Leslie. She also cannot account for the picture.
You will note that the figures of the persons making up the crowd on the sidewalk are sharply defined. They are watching the action and, as you can see, were greatly interested. I should like to have your opinion regarding the picture.
I am playing a brief tour, but letters directed to my home address will always reach me.
Very best regards and with hardest greetings for the new year,


Conan Doyle did not take the bait, writing back:

The effect is certainly produced by the whisk of lady's dress as she rushed into your protective arms. It then wrapped itself 'round her legs. It is certainly not ectoplasm!


It's likely the reason this exchange doesn't get attention is no one had seen the photo in question. But in 2017 I had the great pleasure of visiting the collection of Fred Pittella, and among his photos is the one I've shared at the top of this post. This is almost certainly the photo Houdini is talking about as it is a perfect match in all regards.

There is no way Houdini was confused by this effect, which is a photographic blur exactly as Doyle describes. There's also a double exposure in this photo. The faint figure of Houdini in his straw hat can been seen to the right of Houdini and Gladys Leslie. Is this "ghostly" image what Houdini is talking about in the letter to Doyle? It's not entirely clear.

Whether it be the double exposure or the photographic burr, all I can think is Houdini is testing the famously gullible Doyle. It could be Houdini wanted to entrap the great man; have his very own Cottingley Fairies photo that he could later hold up and an example of Doyle's naiveté. But this doesn't seem like a terrible friendly thing to do, and I can't help but think Doyle recognized the trap. Maybe it's telling that later that same the year Doyle would attempt to snare Houdini with the Atlantic City seance. If anything, it shows the men were playing mind games well before their famous split.

Years earlier Houdini had given Doyle something that was certainly more to his liking. This is also in Fred's collection. It's a copy of the book After Death–What? Spiritistic Phenomena and Their Interpretation by Cesare Lombroso. Houdini inscribed book (below), and Doyle added on the cover page, "One of the Classics on the subject." 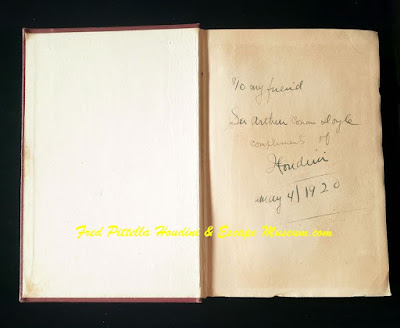