Houdini's wagon wheel rolls away with $4,200 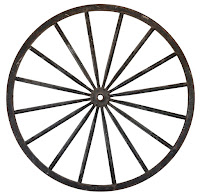 The wagon wheel that came from the basement of Houdini's 278 sold today at Potter & Potter's Magic Collection of Jim Rawlins Part IV auction for $4,200 (not including the buyer's premium). This was the only 278 artifact to sell in today's auction. The two sinks, wine press, and bathtub received no bids.

Some other Houdini standouts in today's Potter auction was a photo of Houdini hog-tied in chains ($3,200); five behind the scenes photos from The Grim Game plane accident ($2,200); a unique autograph album ($4,200); a pair of Cummings handcuffs ($4,200); a German Bell Padlock ($3,400); a photograph of Houdini and Ching Ling Foo ($2,200); and a curious postcard written the day before the Mirror Challenge in which Houdini expresses his wish to one day become a Mason ($900).

A magnificent photo of Houdini emerging from a safe sold for $1,400. I was the unbidder on that one.

In other auction news, a Mastery Mystery Episode 10 poster sold for a reported $43,200 in a recent online Heritage Auction.

Congrats to all the buyers and sellers!