Moving the Milk Can

Recently Joe Fox lent me a January 1987 issue of ESCAPISM which contains a very good article by David De-Val about Houdini's Milk Can escape. De-Val tells the untold story of how Houdini had his can secretly modified in the middle of the night by a man named Harry "Henry" Robins in a Wolverhampton sheet-metal factory in December 1908. The modifications allowed Houdini to perform the escape faster. "I'll hardly have time to get wet," he is reported to have said when they finished work at 3AM.

One detail the story revealed was that Houdini traveled with the can inside a round wicker basket. David points out that the very basket can been seen in Milbourne Christopher's Houdini A Pictorial Life. All these years of looking at these photos -- and that basket -- and never once did I realized I was looking at Houdini's original Milk Can in transit. I love this kind of thing. 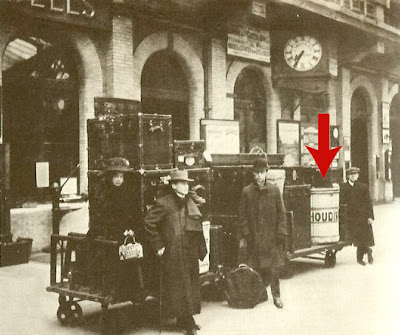 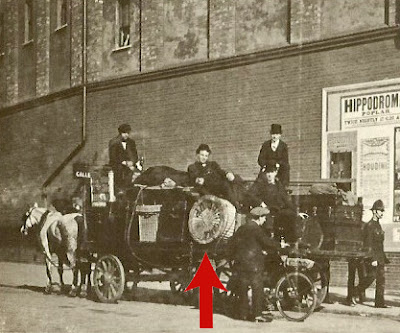 Houdini using a wicker basket to transport the Milk Can makes some practical sense when you consider it probably had to be moved in the high speed of Vaudeville while still wet. However, using a basket also opened up the can to potential damage, and a dented Milk Can could prove to fatal. This was the case in 1930 with a Houdini imitator named "Genesta" who drowned when he failed to escape from a can that had been dropped before his show.
Maybe that's why a later "Houdini Milk Can" -- currently on display as part of the Houdini Art and Magic exhibition (and I suspect is actually Hardeen's 1928 can) -- had a custom made traveling case which survives to this day (below).
Written by John Cox at 9:35 AM