While Houdini has battled Martians in fiction before, I don't believe he's ever actually been to the red planet itself. But now Harry Houdini And The Great Worlds' War! by Daniel T. Foster appears to deliver just that. 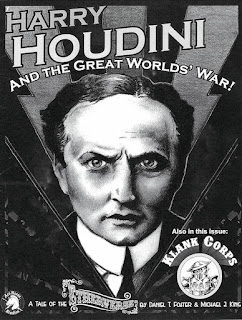 Mars: A world under siege by an invading force.
Jupiter: A sinister foe bent on domination of the Solar System.
Earth: Torn between helping an ally or making themselves a target.
It would take a magic trick to save the Etherverse. Luckily, we've got just the man to pull it off: Harry Houdini!
War and intrigue on the planet Mars in 1919 come together in "Harry Houdini and the Great Worlds' War," the thrilling fourth chapter of The Etherverse! Features a special bonus story on "The Klank Korps," the Earth's attempt at a mechanical soldier...in 1917!

A 24 page comic book made in "Dime Novel" style. Written by Daniel T. Foster, and illustrated by Michael J. King


Purchase Harry Houdini And The Great Worlds' War! at Etsy.