First released in 2010, the second novel in the Wonder of the Worlds trilogy by Sesh Heri, Metamorphosis

, is now available as a Kindle eBook from Amazon

and as a print-on-demand from Lulu. The series finds Houdini joining forces with Nikola Tesla and other 20th Century notables in a battle against Martian agents on Earth...and on Mars! 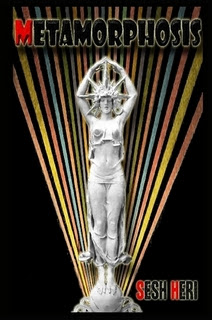 It's over twenty years since the top secret flight to Mars and Harry Houdini is now a world-renowned escape artist recruited by the covert Majestic Seven group to pursue Martian agents on Earth. Time itself becomes the battlefield as the NYMZA, inter-dimensional masterminds using the men from the Red Planet and the astonishing mercury vortex torsion device known as The Bell for their nefarious purposes, are exposed. Houdini is joined by author Jack London and his adventurous wife Charmian, a woman ahead of her time, in the struggle to keep humanity free from eternal slavery and ultimate destruction. Nikola Tesla and young US Navy Ensign Chester Nimitz hold up their end of the fight in a classified submarine designed by the great inventor. The biggest, darkest and most revealing of the trilogy from Sesh Heri!

The third book, The Lost Pleiad

, is also available. However, the description doesn't say anything about Houdini's involvement in the final story. Maybe the Martians (or Charmain) get the better of him in Book 2?
Written by John Cox at 9:17 AM