Bessie visits Paramount (and so do I) 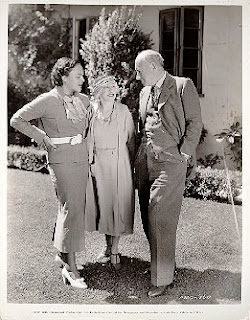 This wonderful photo, recently sold by Stephen Sparks (GranHoudini.net), shows Bess Houdini with director Cecile B. DeMille and his daughter, Katherine, on the Paramount lot in the 1930s. The photo is captioned: "OLD FRIENDS---Mrs. Harry Houdini calls at Paramount studios to invite her old friend, C.B. DeMille, and his daughter, Katherine, to the annual convention of the Pacific Coast Society of Magicians, which opens on July 25th at the Hollywood Knickerbocker hotel."

I was at Paramount on Friday and decided I would go in search of the spot where this photo was taken. My working theory was that it was taken in an area behind the original administration building called Production Park. I've seen many photos of visiting celebrities and dignitaries in Production Park, and it's one of the few areas where you'll find grass on the Paramount lot.

However, as I stood there, I couldn't really find a set of windows that matched the spacing of those in the background of the photo. Orbiting the area, I discovered it's far more likely this photo was taken in front of the administration building, probably near the south/west corner where the spacing of the windows looked most correct (adjacent to what is now the DeMille Building, which may or may not be coincidence).

In the 1930s this was technically outside the studio. Until 1990, a public street (Marathon) ran along the front of the administration building and up to the Bronsan Gate. It can been seen clearly in this vintage postcard. When Paramount sold Western Costume and demolished the building for its new theater, it enclosed the area. The street is now a pedestrian walkway and a parking lot now extends the studio to Melrose Ave.

It makes sense that this photo op would be done here instead of on the actual lot. The front of the studio was probably the most photogenic area in the 1930s when Paramount was a bustling, busy factory behind those famous gates (and still is).

For those who wonder whether Bessie might have been feeling the ghosts from Houdini's own film work on this day, know that when Houdini made his two Paramount features, the studio was located at the corner of Vine and Selma. They wouldn't move here until 1926.

Here's a modern map of the studio with a red asterisk where I believe the photo was taken. 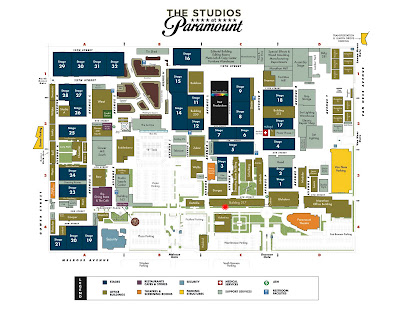