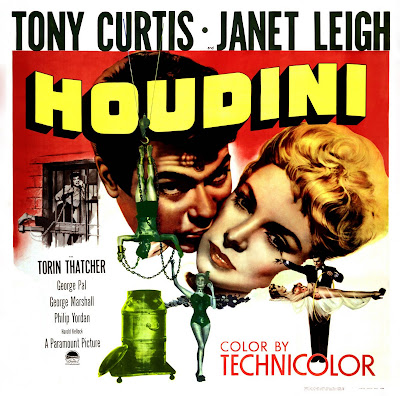 Unquestionably the most famous Houdini biopic is Paramount's 1953 HOUDINI starring Tony Curtis and Janet Leigh. It's amazing just how many magic and Houdini buffs, including myself, cite this one film as the reason they became interested in the subject. While HOUDINI is almost entirely a work of fiction, it does capture the glamor, drama, and danger of Harry Houdini in a way that I think would have made the Master Mystifier proud.

Since the 1930s, Hollywood had worked to tell the life of the great magician. RKO developed, but never produced, a movie that would be a thinly veiled fictional biopic called Now You See It. In 1936, Beatrice Houdini and her manager Edward Saint sold film rights to the book Houdini His Life Story

by Harold Kellock to Paramount. Under the supervision of Dore Schary, several scripts were developed, but no movie ever resulted. In May 1949, a former drug store operator, Joseph Raboff, and a real estate man, Earl Cohen, acquired the rights to the Kellock book in the hopes of making a movie and a television series with either John Garfield or Lee Cobb in the lead role. Again, the project never materialized. 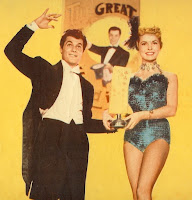 Then in September 1951, Paramount reacquired the rights to the Kellock book from Cohen and Raboff when producer George Pal expressed interest in the project. This time the result was the big, bold Technicolor treat we know today as HOUDINI. Pal and director George Marshall cast real-life husband and wife Tony Curtis and Janet Leigh in the roles of Harry and Bess Houdini. Other cast included Angela Clarke as "Mama", and Torin Thatcher as Harry's fictional assistant and manager Otto. Dunninger receives a lavish credit as technical advisor, but according to Tony Curtis, the true technical advisor on the film was George Boston. "Dunninger was a blow hard," Curtis would tell a Magic Castle audience in 2009. And speaking of The Magic Castle, that's co-founder Bill Larsen, Jr. (uncredited) performing the Guillotine act at the SAM convention in the film.

HOUDINI is mounted as a lavish magic show within a movie. Several magical effects are played out in their entirety and primarily in long shot. In fact, it plays as such a magic show, live audiences I've seen it with applaud the conclusion of each trick. As for the stars, Curtis and Leigh are nothing less than glamorous!

The film also beautifully recreates many of Houdini's most famous escapes, including the straitjacket escape both onstage and suspended, a safe escape, a metal straitjacket (said to be an authentic Houdini prop), a jail escape, and Houdini's ordeal trapped below the ice following his escape from a submerged metal box. This is one of the most dramatic and memorable scenes in the film, and while Houdini himself was responsible for this fiction, it was actually first slated to appear in the unmade RKO film in 1932.

Most interesting to long-time fans of HOUDINI is the revelation of several cut scenes. Set photos posted on the LIFE magazine website show Curtis and Leigh performing the Cremation illusion, and a recreation of Houdini's Milk Can escape (the prop can used in the film now resides in the Houdini Seance Room at The Magic Castle). Also, the plane to plane transfer from Houdini's silent film The Grim Game was re-staged on the Paramount backlot for this film, making it the only biopic to acknowledge Houdini's silent movie career (well, it made an attempt to, at least).


While HOUDINI starts off light and breezy with wonderful romantic byplay between Harry and Bess, the movie actually grows quite dark as Harry's obsession gets the better of him. One of the best scenes in the film is when Harry and Bess have an argument in an empty theater with a bubbling Water Torture Cell in the background (here called the Pagoda Torture Cell). "I wish it was another woman who took you from me, Harry, that I can fight. This I can't," says Bess. Faced with losing his wife, Harry promises to cut the Cell from his show. 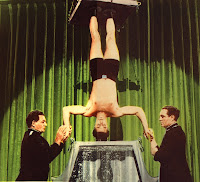 However, on show day, Harry cannot resist the cheers of the audience and the cries of "more", and brings out the bubbling cell for an encore. But a tender appendix and an accidental blow backstage (he walks into a prop sword) weakens him and he becomes trapped in the cell and drowns before Bess and the horrified audience (establishing the myth that persists to this day that Houdini died in the Water Torture Cell). As his limp body is dragged from the smashed cell, the camera drifts off the dying magician to his first innocent magic poster and we are reminded just how far Houdini has traveled in pursuit of applause. It's a remarkably dark and tragic ending that makes a powerful impact.

HOUDINI was well received by the critics of the day. However, the magic community was less enamored. Magician and Houdini biographer Milbourne Christopher (Houdini The Untold Story

) led the charge in a review that took the movie to task for its many fictions and inaccuracies. Said Christopher, "I won't attempt to list the anachronisms and inaccuracies in the film. Generally speaking, if any phase of Houdini's life is shown on the screen you can be sure it didn't happen the way it's pictured." 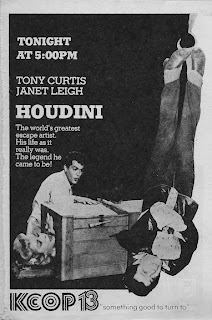 Perhaps this attitude is understandable. The magic community had waited years for a Houdini biopic, and one could see how a largely fictional treatment would disappoint. Of course, no one then had any idea just how influential the film would be, and how many magicians and Houdini enthusiasts it was inspire. In that regard, Paramount's 1953 HOUDINI is certainly the most successful of all the Houdini movies.

Happily, HOUDINI is also the most accessible of all the Houdini movies. It first aired on television (NBC) in January 1965, and is repeated on a regular bases to this day. It has also been released on VHS

, LaserDisc, DVD and Blu-ray. It's even periodically still screened in theaters. To this day, HOUDINI remains one of star Tony Curtis' most well remembered and well regarded films.