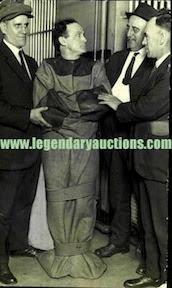 A truly remarkable photo of Houdini in a full body straitjacket, or "punishment suit", has been sold by Legendary Auctions for $328. The original Type I photo is from the files of the Milwaukee Sentinel and is significant for several reasons.

First, this is only photo I've ever seen of Houdini in an actual one-piece punishment suit. There is a photo in Christopher's Houdini The Untold Story of a young Houdini in full body straitjacket restraint, but it appears his legs are in a separate bag. Also, it's pretty uncommon to find photos of Houdini in restraints of any kind this late in his career (outside of his film work).

I'm also wondering if this was going to be the restraint Houdini planned to wear during his Buried Alive stage escape. Looking at the well-known Buried Alive poster, it appears he's in a punishment suit in the casket. It never really hit me until I saw this pic how using a punishment suit played nicely into the Egyptian-mummification theme of the escape.

The presentation of the punishment suit here appears to be some sort of publicity stunt, perhaps for newspaper men (those look like reporters to me). Again, unusual to see this late in Houdini's career when exposing fraudulent mediums was what he typically used to generate publicity. There is no date for the photo, but on the back is pasted a caption from one of two appearances in the Sentinel (in 1934 and 1989) saying it was taken in Milwaukee. [See UPDATE.]

Finally, it's possible this is one of the punishment suits once owned by Sidney Radner, although it does not appear to be the one he demonstrated in the documentary, The Truth About Houdini. The photo below is of a punishment suit resembling this one that Radner sold in a 1999 Butterfield & Butterfield auction for $24,150. Two more Radner punishment suits sold in the Great Houdini Auction in Las Vegas in 2004.

Even I threw a bid in for this one. Photos like this don't come along all that often. Congrats to whoever won this fantastic and historically fascinating photo. 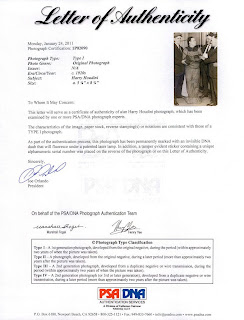 UPDATE (2022): A second image has surfaced and I can now ID this as being Houdini and Sherrif Phillip C. Westfahl in Milwaukee in 1923. These photos were taken to promote a "padded Cell Suit" challenge at the Palace Orpheum on Oct. 5. 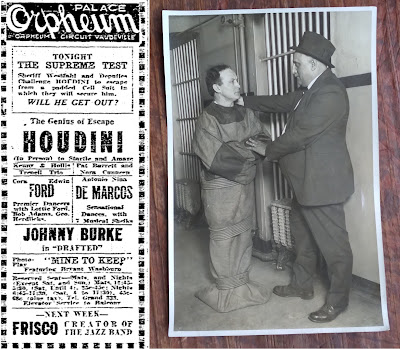